3 ways the circular economy is vital for the energy transition

The circular economy is a system which aims to get the most out of materials, keep products and materials in use and design them to be cycled back into the economy, eliminating waste. It is also a vital pillar of the energy transition.

Over 70% of the world’s GDP is now covered by a net-zero target, with many advanced economies aiming to decarbonize by 2050 and China committing to 2060.

Transforming our current economic system is both a daunting challenge and a massive opportunity – one like the world has never known.

Getting to net-zero by 2050 will mean accomplishing what seems unimaginable, like entirely phasing out the internal combustion engine or adding the equivalent of the world’s largest solar farm every single day.

To support and scale these efforts, speed will be of the essence – especially given last year’s climate report from the Intergovernmental Panel on Climate Change (IPCC) confirming that urgent action is needed to stop global temperatures from rising above 1.5°C and 2°C. To build out the energy infrastructure the world needs at speed and scale, circular economy will play a vital role in three main ways.

The energy transition depends on a shift to renewable power, pivoting away from natural gas and petroleum, and towards solar, wind, hydrogen, geothermal power, or other zero emissions tech supported by batteries.

But transitioning to these technologies is triggering massive demand for the critical minerals required, such as lithium, cobalt and rare earths. 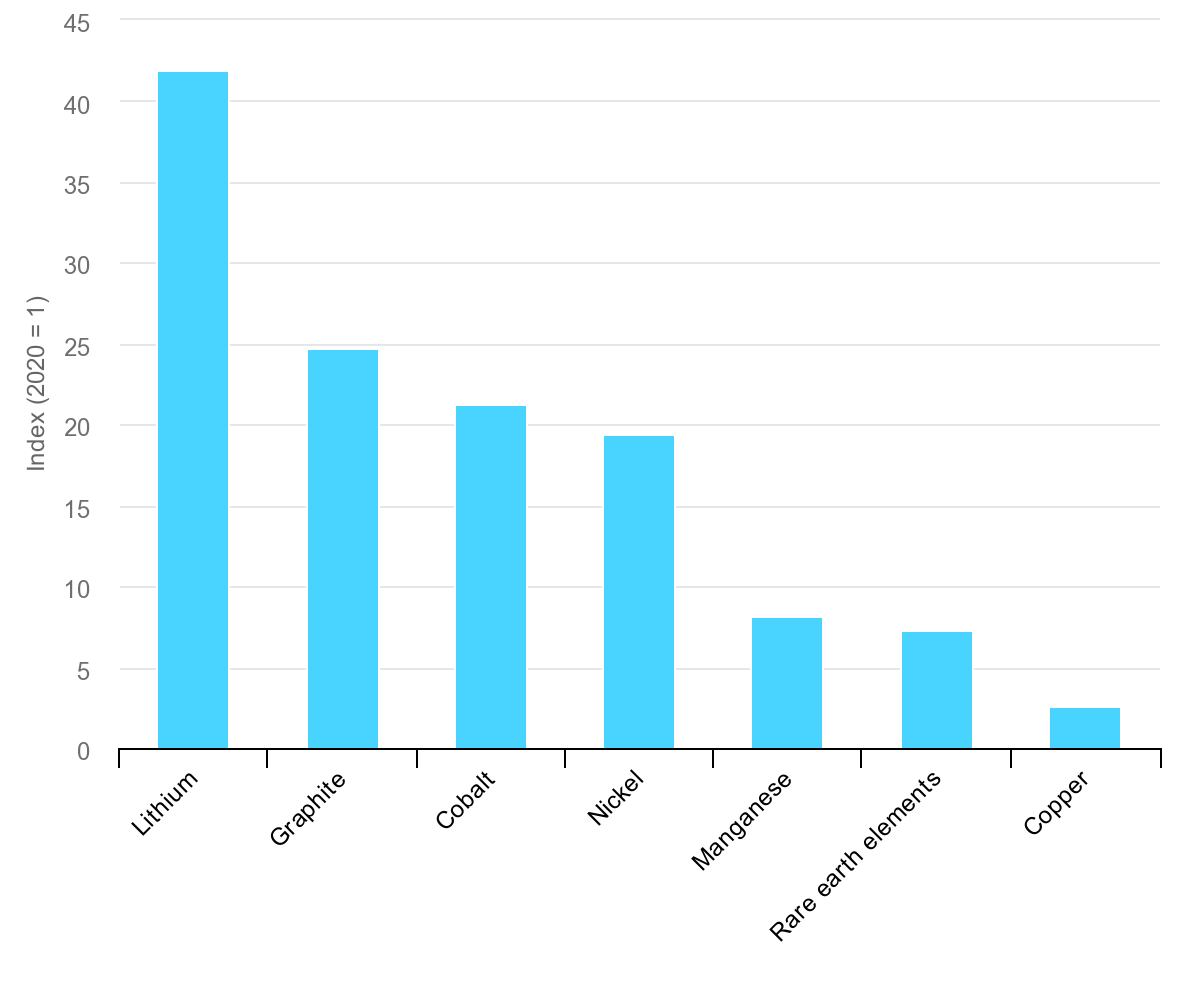 According to the International Energy Agency (IEA), getting to net zero by 2040 will require a six-fold increase in mineral input by 2040, some key metals, such a lithium, could see growth rates of over 40 times, with nickel and cobalt demand growing more than 20 fold. Demand is already soaring, the price of lithium in February 2021 hit an all-time high of $50,000 per tonne up from $10,000 just one year ago.

Obtaining these materials exclusively via mining presents sustainability challenges. For instance, the process of mining neodymium, a rare earth metal used in many electric motors and generators including those in wind turbines, is highly polluting. The metal also appears in relatively small concentrations and is hard to capture, making its extraction more intensive compared to other minerals.

These materials also present potential challenges to energy security in Europe. The EU currently supplies only 1% of the raw materials needed for key technologies such as wind energy, lithium batteries, silicon photovoltaic assemblies, and fuel cells.

The circular economy can reduce the dependence on mining and ensure longer-term use of these materials if implemented at scale. Recycling could help recover metals from the almost 60 million tonnes of smartphones, laptops, hard drives and many other electronic devices. Currently only 1% of neodymium is ever recycled and other metals in electronics that are key to the transition (tantalum, lithium, cobalt and manganese) also face poor rates of recycling.

Some companies are moving ahead on this. Many of the initiatives to recycle these materials are based around IT equipment. The systems being applied to smartphone recycling today may be effective for wind turbines and other equipment tomorrow.

To get to net-zero, clean tech such as electric cars or energy transition equipment will need to be made from zero emissions materials, as well as not produce emissions when they are used. This will be a significant challenge. According to a World Economic Forum study, by 2040, when most vehicles are predicted to be electric, the materials used to produce them could account for 60% of their total lifetime emissions as opposed to 18% in 2020.

In fact, emissions generated by the production of all materials globally have more than doubled in the last 20 years. A recent UNEP study estimates this is from 5 billion tons of carbon dioxide equivalent in 1995, to over 11 billion tons in 2015, reaching approximately a fifth of all greenhouse gases emissions.

The circular economy can be a source of low carbon materials. For example, recycled aluminium emits up to 95% less carbon dioxide than that from virgin sources. Building energy transition infrastructure from secondary materials will help our transition to net-zero.

Creating a truly sustainable energy transition means factoring the circular economy in at the design stage.

We need to install massive amounts of renewable energy over the coming decades. However, by the early 2030s, the first generation of solar will come offline, and by 2050 it’s predicted that we could be decommissioning 78 million tonnes of panels per year. In the same year, wind turbine blades could account for 43 million tonnes of waste.

So now is the right time to think about how these products are designed for longer life, easy disassembly and recycling – and how we create and operate the systems to deal with the waste. With the right planning and attention, the panels coming offline in 2030 can become the new panels installed in 2031.

Companies have started to put this into action. For example, Siemens Gamesa recently announced the world’s first fully recyclable wind turbine blade. The resin used in blades allow for an easy separation of different materials at the end of the blade’s working life, allowing the component materials to be recycled. Chinese electric vehicle maker BYD also claims that its simpler battery chemistry and large cell size allows for easier recycling.

Another critical part of circular design is life extension. We should make durable products designed to be repurposed for other uses. Used car batteries which can no longer hold sufficient charge for the range needed in a motor vehicle still hold a residual capacity of 60-80% and can be effectively used in other applications that require lower performance, such as stationary energy storage to support the grid.

This is already happening, albeit not at full scale. The stadium of Dutch football club Ajax used second hand Nissan leaf batteries to create a storage unit equivalent to the power used by 7,000 homes in one hour. This allows the club to store energy on sunny days that powers the stadium in evening games, as well as supporting the local grid.

Circular design can create valuable economic opportunities. The Global Battery Alliance predicts that the market for second use batteries could grow to $4 billion by 2030, provided that standardization and better, more flexible energy management systems can be introduced.

The time to act is now

The energy transition is finally gathering pace. And at its core is a move away from burning fossil fuels to a system which uses a much broader range of raw materials to fulfil our energy needs.

Circular economy has to be baked into the energy transition by design to ensure the world has a sustainable supply of raw materials. This will take concerted action from companies and regulators.

Companies which use critical materials in their products need to get ahead of the issue. They need a circular economy strategy, to prioritize key materials and set targets and measurable KPIs. They need to think about a product’s end of life at the start of its life. And think about the role they can play in extending the product’s life or building a reverse supply chain to bring the product back.

This article was first published by the World Economic Forum.

Six African countries formally launch the Africa Green Hydrogen Alliance and invite others to join in making their continent a global frontrunner.

Podcast: How to run an entire country run on 100% renewables

It will take enormous flexibility, interconnectivity, and storage, but it is possible — explains the latest episode of Inside the Energy Transition.

The zero carbon home is well within our grasp. The technologies we need already exist and are coming down in cost. Juliet Davenport OBE, Founder of Good Energy explains how we get there.

What the IEA net zero roadmap means for businesses and governments

The roadmap shows that net zero has become mainstream, fossil fuels must be phased out urgently and that those businesses that work towards cutting their emissions in line with 1.5C will be in the best position to thrive, argues We Mean Business CEO, María Mendiluce.