Müller & Makaroff: “Humans treat nature as an entity that only has duties”

Amid an array of diverse projects, Christoph H. Müller and Eduardo Makaroff – both members of the Paris-based Gotan Project – have launched a new musical project, with the focus on the Anthropocene.

The Anthropocene defines the Earth’s most recent geologic time period, one that is dominated by human activity, activity which is the cause of most of our recent adverse environmental events.

“We want to explain to people what the Anthropocene is,” Makaroff says. “It is the era in the Earth’s history when human activities modify ecosystems. It is a monumental ecological force. Climate change is very important, but the concept of the Anthropocene goes even further: It encompasses the climate change phenomenon, as well as its disastrous consequences on all ecosystems. It is about the destruction of the living, including fauna, flora, and humans,” he further explains.

“Antropoceno! aims to address the interaction of elements which cause a chain reaction: climate change causes warming, which in turn spurs further warming, for example. We need to break this vicious circle as a matter of urgency,” Makaroff says.

“We are also interested in nature’s ‘rights,’” says Müller. “The idea of giving rights to nature in the same way that a company can become a legal entity, with rights and duties, is a potentially very powerful paradigm shift. Humans treat nature as an entity that only has duties –­ provide us with what we need, air, resources – but no rights. We want to deal with this subject through our music,” he adds.

Antropoceno! aspires to link climate change to the 16 other Sustainable Development Goals, and to the rights of nature, and help break the feedback loops, all of which, according to Makaroff, “are linked to the anthropocene.”

As artists, Müller & Makaroff willingly recognize the freedom they enjoy to use terms such as “Anthropocene”, despite its imprecise definition, as they understand the powerful cultural significance such terms carry.

“Our goals with Antropoceno! are to increase awareness about what human activities entail for our ecosystems and to foster the idea that not only is it possible for us to act, but that it is imperative to act quickly and to act now,” explains Müller.

“This is what we can contribute as artists; the hope that music will help convey these notions, make them understood, and ideally provoke the necessary actions against this phenomenon. We will obviously never compete with an IPCC report for example, and it is not our role. We base our thoughts on science and strive to act consistently with it, but our field of action is public awareness, and our best tool is music,” Makaroff says.

Müller & Makaroff continue to underline the need to act collectively for a more powerful response to the climate emergency. They apply this to Antropoceno!, which explains their versatile collaborative choices. For example, they describe Doro Gjat, as a “non-urban rapper connected with Nature,” and feature Fémina, Hilda Lizarazu & Mia Folino’s more feminine take on the eponym piece.

The latest Antropoceno! release: El lloro de la Tierra was released on May 7. The song, described by Müller & Makaroff as “a cry, an interrogation, a supplication and a poem,” gives a voice to La PachaMama (‘Mother Earth’ for Andean Peoples), who tells us about her troubles through the singing of Mariana Carrizo, herself descending from Incas.

With instruments and words that differ from those used by the scientific community, they intend to speak to the heart of their audience. Müller warns however that “such an exercise remains delicate and intricate, as results are not guaranteed. We may have a shot at engaging a larger public, but the music industry can only measure success according to its own criteria, such as sales. It cannot measure the impact of the messages contained in music. So, we opted for a grassroots attitude, releasing each piece one by one. We want Antropoceno! to generate learning and behavioural change. Each person won to our cause is a victory for us.” 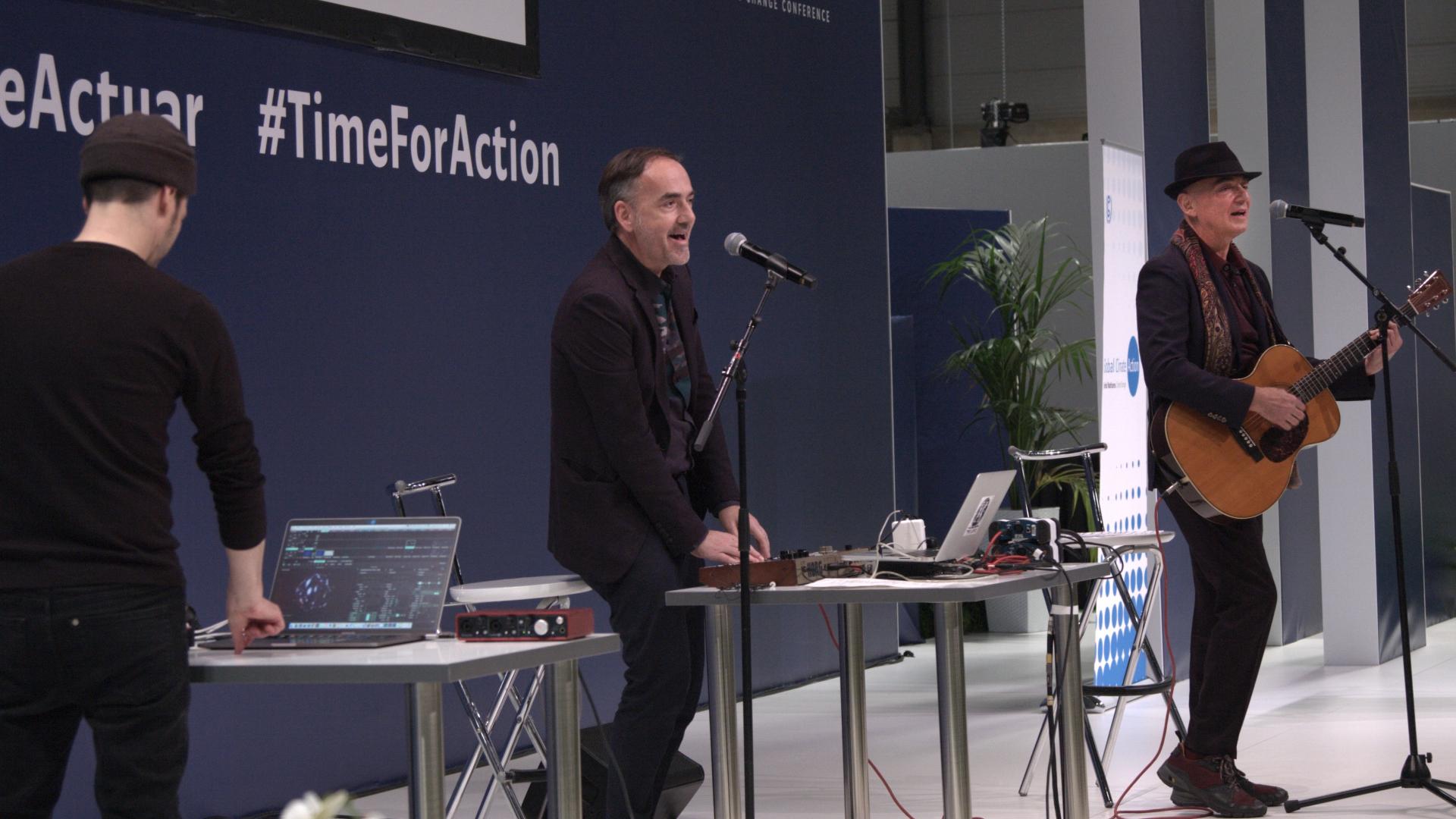 They illustrate this approach with the Global Climate Action Awards ceremony, to which they participated in person in Madrid in 2019, and virtually in 2020. Despite the fact that the number of views of the event on YouTube remains modest, they believe that “those who watched are likely to have integrated what these events are about, what can be done, replicated and amplified, and become actors themselves, at the very least, by spreading the message.”

Müller immediately adds an artistic coating to their objectives: “I believe in the strength of beauty to achieve these goals. Presentation counts, imagery, typography, everything. Aesthetics can attract and help people integrate concepts that aren’t presented solely through their raw dimension.” Makaroff concludes, “Poetry is a tool of ours, because poetry can transform reality.”

Youth voices are pivotal to elevating climate ambition and driving systemic change. And the Climate Champions are committed to integrating these vital actors into the core of our work.

Indigenous rights activist and lawyer, Cindy Kobei discusses custodianship, the law, deepening equalities caused by the climate crisis, and the need to rekindle our connection with the natural world.

“The climate crisis cannot wait for men to act, we need women at the top table now”

Women must wait 136 years before we get gender parity. To highlight this imbalance, and to mark 2022’s International Women’s Day, SHE Changes Climate has released a new short film.